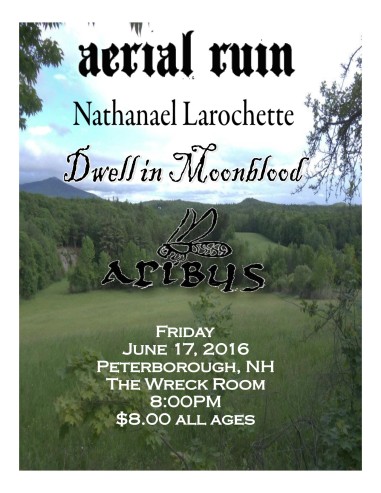 On June 17. 2016 I had the pleasure to put on a show with some incredible acts (Dwell in Moonblood participated as fans): Aerial Ruin, Nathanael Larochette, and Apibus. It was a beautiful summer night with the temps in the 70s. The sky was as blue as can be and the forest glowed green under the sun’s rays. The music was fitting for this day and it had become a new memory in my life that I hold dear. There was something special about that night of music and revelry. It was one of those moments where art and life go hand-in-hand. The music I heard put me into a state of mind that was filled with nostalgia, hope and love. I got to meet some incredibly talented and humble people who I can call my friends. Their music drives them day in and day out. The music helps them cope with the trials and tribulations of life. In turn they helped me cope with these trials I experience all throughout my life. Everything was laid bare and my emotions grew and grew. It was one of those moments I didn’t want to end. But alas the dream had to end, and the images remained.

The show happened in a small venue in Peterborough, NH (my hometown). The lights were aglow in washes of red, and blue. The musicians with instruments in hand performed in front of a small crowd, but a crowd that appreciated every note and lyric. There was a haze of peace and introspection within the venue. People had their eyes closed as the music flowed through them. 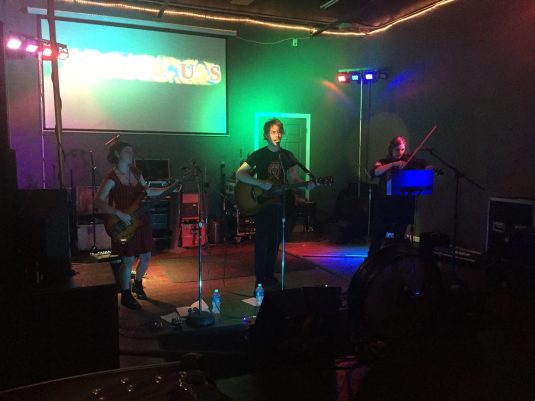 Hailing from the concrete jungles of Brooklyn Apibus started the show with a delightful duet between Renee Heitman and Albo Sudekum. They sang about a folktale in old Norwegian, their voices were incredibly ethereal but full of passion. The notes rose and fell like an ocean wave. After the duet ended Apibus played a bombastic, catchy and stunning set. The vocals of Stuart Sudekum were raw and real, he uttered longing for the times and legends of old, and played with a natural energy that kept the crowd engaged. There were many different songs filled with the notes of flute, violin, bass E-Bow and voice. It was as natural and real as can be and they will only get better and better as they learn more and more. This is one band to be on the lookout for in the future, they are a fresh and new element to the growing neo-folk scene in the United States. 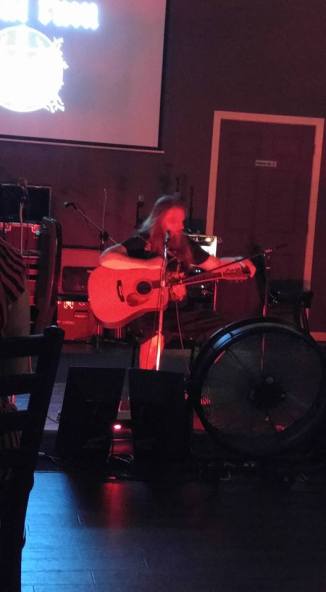 With red lights washing the stage Erik Moggridge of Aerial Ruin began to play a set that was absolutely wonderful. Erik is really able to give off a stage presence that is entirely humble without a lick of pomposity and overblown ego. He masterfully engaged the crowd with his despondently beautiful crooning and hopelessly deep guitaring. There was complete sense of uncomfortable comfort in the venue when he played. Aerial Ruin’s music took you to a world of night and phantasms, a place between the living and dead. The music was so visual that all you could picture in your head were these images being evoked in the music. It was a journey into the farthest reaches of the subconscious a complete transparency between the soul and the human shell. Aerial Ruin closed his set with an acapella of his vocals through a looper all I can say is this effect sent chills up and down my back and made the hairs on my arms stand on end. That wonderfully beautiful voice of his grew and grew until there was no escape. At the end of his set the crowd was stunned in silence. 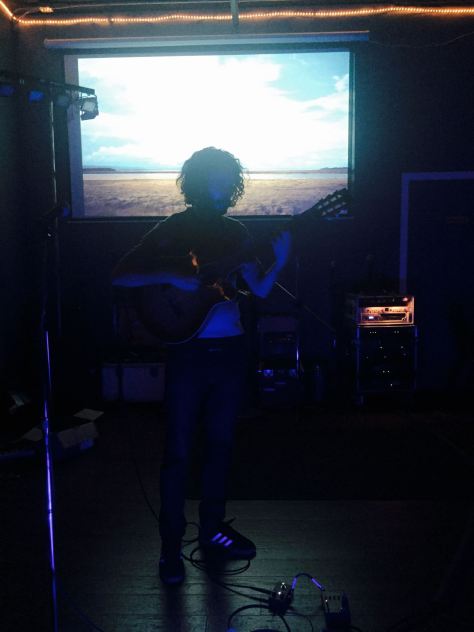 Nathanael Larochette of Musk Ox fame headlined the show, and he played his entire acoustic album of his new release “Earth and Sky”. He also treated the fans to two of his brilliant acoustic passages in Agalloch’s album “The Serpent and the Sphere”. He opened with “(serpens caput)” and closed with “Core Serpentis (the sphere)”. As for the set itself he immediately drew in the crowd with utterly spellbinding classical guitar. He showed eternal focus and didn’t miss a beat in the music. The crowd was incredibly engaged in every note, finger pluck and strum. The room was filled with a quiet comfort as he played his set in a wash of sky blue lights. Every stress or negative emotion one was having in the crowd disappeared in a halo of wonderfully comforting guitar-work. The room felt healed and whole when the music played on. Nathanael’s set put myself into a journey of self-reflection and clarity. I saw images good and bad from my life and saw them dissipate into the ether. I felt a catharsis I haven’t felt in a long time when he played. As the final notes completed the crowd clapped long and loud and then the show ended with a sense of quiet peace.

This show was something I needed. New friendships developed, the love for my family grew and grew. And I felt a chapter in my life ended after this show. There were feelings that resurfaced and thoughts rethought and it was a day in my life I wish I could experience again and again. I will always remember the jokes, the drinks and the natural landscape that surrounded us as the night waned and morning returned anew. Until next year! 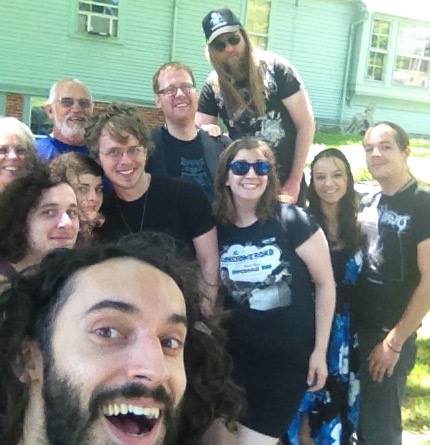