When the news came out about the emergence of KHôRADA I was super excited and intrigued to see what direction Don Anderson, Jason Walton and Aesop Dekker would go with the inclusion of Giant Squid’s brainchild AJ Gregory. To me this was quite the dichotomy of styles and influences that could in turn create an album so unique and mammoth that it would be genre-defining than genre-rehashing. I think this has always been the motivation of these talented musicians over the years, when Agalloch was an entity they always challenged themselves and went to higher levels of creativity, the same can be said about Giant Squid. What I see in KHôRADA’s album “Salt” is that Don, Jason, AJ and Aesop do not believe in a mediocre product, they have crafted a piece of music that is relevant, challenging and absolutely crushing. The heaviness in this album is beyond words, there is so much riffs that are doom-laden and just bleak. The sounds erupting from all the instruments absolutely engulfs you in suffocating, strange and otherworldly ways.

When you are first introduced to “Salt” there is a sound of distant horns heralding the end of the world. As the song progresses the helpless, and emotive vocals of AJ Gregory arise from the watery depths. His voice prophesizes the end of the world and the birth of the sixth mass extinction. After reading the lyrics of “Edeste” I came to the conclusion that “Salt” is going to be a hopeless, fatalistic, and nihilistic journey. As the album progressed the themes and emotions in music continued to grow and grow into utter despair and despondency. This may sound negative but I guarantee this is a positive, KHôRADA’s “Salt” is a tiring but important journey of the heart and soul. After multiple listens I was thinking more and more about mortality of not only myself but the whole of mankind. The guitars, bass, drums and vocals put the listener through a series of inner trials and tribulations and you come out of the fog with a different view of life and the inevitable doom that will follow.

As the album progresses the songs get more and more dense/evocative. As I am listening to all the nuances I am hearing snippets of Agalloch and Giant Squid. The guitar work of Don Anderson is always a stand out, the solos and leads he incorporates are very distinctive and melancholic. AJ Gregory’s guitars are a lot crunchier, and it really gives KHôRADA a unique identity. The one thing that really impressed me more than anything else is the bass and drum work of Jason and Aesop. The foundation they have built together really gives “Salt” such depth, intensity and heaviness. The drumming is just outstanding and there are a ton of bass leads and lines that are right at the forefront that makes the tracks all the gloomier.

The one thing you will notice above all else about “Salt” is the very apparent political statement found throughout AJ Gregory’s lyrics. He specifically said in the conception of “Salt” that it is a protest against the Trump-era and how this era will expedite the inevitable end of the world. There is such a sense of anger and hopelessness in the lyrics that it makes you really concerned about the future especially for future generations. Surprisingly enough AJ Gregory, Don Anderson, Jason Walton and Aesop Dekker tend to develop music at the most relevant times which increases the impact and weight of “Salt”. Truly this is a testament to the talent and skill they all have, I am really looking forward to seeing what type of album they will come up with next. When you have such gifted musicians in a project like KHôRADA the next album will inevitably be impactful and genre-defining. In the dark ages we are in now as human race a band like KHôRADA is the light found in the darkest recesses of the abyss. 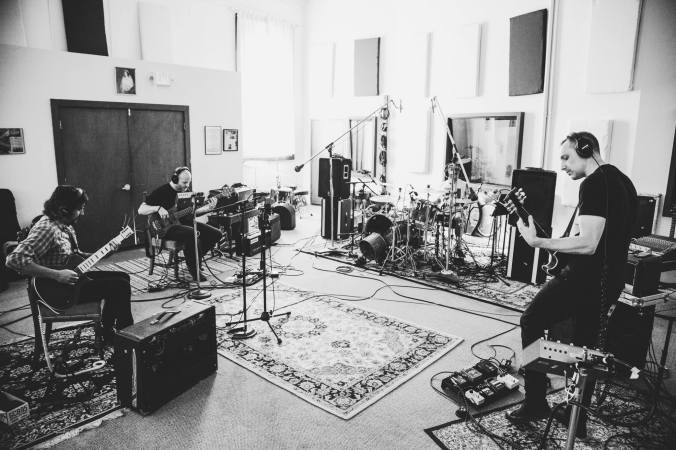