Bassist Jason W. Walton of Khorada, ex-Agalloch, Snares of Sixes, Self Spiller, Nothing, Dolven, Especially Likely Sloth and many other musical acts has been a pillar in the Pacific Northwest metal community. He was one of the original members of Agalloch and then went on to do a new and highly-anticipated project Khorada with fellow ex-Agalloch band members Don Anderson, Aesop Dekker and Aaron John Gregory of Giant Squid. I wanted to learn more about his music projects, vision and hope for the future in regards to being a musician. Me like many others are waiting with bated breath to see what Khorada will sound like in the meantime we can look forward to hearing his new project Snares of Sixes which he talks about at length in the interview below. 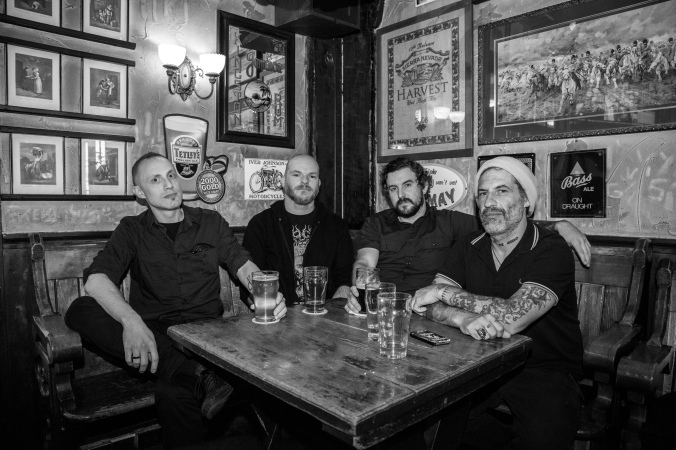 You have been working on multiple projects for many years now, out of all the works you have done what do you think stood out the most to you as an artist?

JWW:  Albums I’ve been a part of stand out to me for different reasons. Agalloch’s “The Mantle” jumps to mind immediately because of the critical acclaim it received and how that afforded us to tour and bring Agalloch to places we never imagined going.  On the other hand, the debut Snares of Sixes ep that I just finished stands out as well, because that was a beast of a record and is easily my most ambitious recording to date.  Every recording I’ve been a part of has been important or noteworthy to me, because each acts as a stepping stone and a learning experience for the next one.

A lot of your works are tied to electronic, ambient and drone scapes what made you want to go this direction? What about this style do you like most?

JWW:  I first started working in these styles because I loved the freedom it afforded me.  I loved being able to work alone.  I could compose, record and perform entirely by myself if I wanted, and didn’t have to rely on others to get work done.  The nature of the music itself is basically limitless as well and I feel very free to do whatever I can possibly imagine.

Is there any new or interesting things you can update our readers with about Khorada?

JWW:  As of right now, there is not much to report.  We have news coming soon, but as of right now I can tell you that we are deep within writing our debut album.  I feel like we are at the point where we have found our voice as a band, and are refining our sound.

What direction do you hope to accomplish with Khorada?

JWW:  I don’t really want to use too many descriptors or make too many comparisons just yet, as the music can still change quite a bit at this point.  We all came into this being very aware of our previous bands, and not wanting to repeat those themes, or ideas. Obviously, when you have ¾ of Agalloch in a new band, there are going to be some undeniable elements of Agalloch in Khorada, and of course, there will be things reminiscent of Giant Squid as well, due to AJ’s large role in Khorada.

In regards to your influences and points of inspiration what are some triggers that allow you to create and conceive new ideas?

JWW:  It really depends on the band. Khorada is lyrically and thematically controlled by AJ.  Of course we all have ideas thrown in here and there, but that is largely AJ’s department.  For a band like Snares of Sixes or Self Spiller, I typically focus on a single idea, or a feeling, and work around that. Self Spiller’s “Worms in the Keys” album was written around themes of travel, homesickness, allergies and being caught in an unfamiliar space. The Snares record I just finished is literally about Kombucha, yeast and bacteria.  Many of these ideas have come from books I’ve read, or experiences I’ve had.

You have done many tours over the years, in your eyes what do you think was the most memorable?

JWW:  I think the most memorable tour for me was the first time we went to Europe. Most of us had never been to Europe before, so playing to audiences all over Europe was unreal.  Also we had a month long tour with Fen in Europe, and that tour was highly enjoyable.  Usually for me, I remember stand out shows, or places, not necessarily tours. London, Copenhagen, Lithuania, Tel Aviv, Bucharest. These are the places and shows that are the most memorable for me.

You have been working with Don Anderson, and Aesop Dekker for many years now, what about them do you admire most and with this new chapter in your life has your creation process changed at all with them?

JWW:  Don and Aesop are amazing musicians, and my closest friends. They always push me and challenge me as a musician. Aesop rarely plays the same way twice. He is always trying new things and is not afraid to experiment. This pushes me to be quick on my feet and forces us to lock in together and feed off of each other. Don’s command of the guitar is inspiring. He knows enough theory to be dangerous, but loves punk enough to not be a snob. Within an hour of Agalloch breaking up, the three of us had a group text going about what we were going to do next. There was absolutely no reason for us to stop playing together.

Have you taken on even more songwriting duties with Khorada, and if so what are some ideas you decided to run with?

JWW:  Writing as a bassist is a very odd thing. Of course writing basslines to existing guitar parts is one thing, but writing the foundation is tricky. It’s very hard to listen to a line of singular notes and imagine what can come out of that. We did that with Agalloch once. I wrote the foundation to “Birth and Death of the Pillars of Creation” this way and it was very rewarding.  We are trying a similar approach with Khorada but AJ and Don are writing the lion’s share of the music.

If you could think of three words to describe Khorada’s sound what would they be?

Do any of your outside interests help you conceive new ideas at all?

JWW:  Most definitely. My love of cooking heavily informed the Self Spiller debut, and a couple years ago I became quite passionate about brewing Kombucha which was the inspiration for Snares of Sixes “Yeast Mother” EP.

And finally where do you hope to see yourself as a musician in 2017?

JWW:  In 2017 I plan to record with Khorada, and hopefully start booking some shows with them as well. I also plan on releasing the Snares EP, and recording more Snares. I’ve also assembled a live band for Snares and we hope to start performing this Winter or Spring.